When they first appeared on the mobile game scene, hyper-casual games became the industry phenomenon. Here’s what you need to know about this unique mobile gaming genre!

It was with the release of Flappy Bird in May of 2013 that hyper-casual games were birthed. In a matter of weeks, Flappy Bird became a global phenomenon.

It was developed by Dong Nguyen, a Vietnamese game developer. After designing Flappy Bird, he became incredibly popular.

At the time it became clear that you don’t need a lot of resources and time to develop a mobile game. Flappy bird generated 50 million downloads by January of 2014, making it one of the top free games on the Android and iOS App Stores.

Before that, games were rich with features and users had to spend some time before being immersed in the game. After the success of Flappy Bird and the virality of that game, the world realized that bigger isn’t always better.

Even though the author quickly removed the game under criticism over the design, it still generated around $50,000 a day from in-app advertising.

The term “hyper-casual” is established in the world of mobile marketing, but the category still doesn’t exist in the App Store and Google Play Store. Some even say it’s more of a business model, rather than a mobile game genre.

Whatever the case may be, the success of this genre is undeniable – it changed the mobile game industry forever.

Back in 2018, hyper-casual games absolutely dominated the top charts. Now, in 2022, we still see many hyper-casual titles among top downloaded or top-grossing games.

What Is a Hyper-Casual Game?

Hyper-casual games are characterized by simple gameplay mechanics. They have very few features, unlike core games, and can be “explained in a screenshot”, as former Rovio vice president Eric Seufert said. Furthermore, it’s a lightweight game with minimal design.

They are relatively easy to produce, but they guarantee to offer a high level of entertainment and replayability. Hyper-casual games are produced in a way to be approachable and enjoyable by the widest number of players.

A hyper-casual game will most often generate revenue from in-app ads, rather than in-app purchases.

The business strategy of publishers working in the hyper-casual genre will usually be to quickly design and publish the game. After publishing, the goal is to acquire as many users as possible. It is usually done through paid user acquisition. After obtaining a significant user base, revenue is obtained through paid ads displayed in the game.

Lifetime Value of a Hyper-Casual Game

The lifetime of hyper-casual games is usually short. Considering that the average user nowadays has over 100 apps on their phone, competition in the hyper-casual space is fierce. Publishers usually resort to keeping the content “fresh” with constant releases of new titles. Subsequently, LTV (long-term value) of a hyper-casual game player is not very high.

Such games seized a significant share of the market that usually wouldn’t identify themselves as gamers. Just recently hardcore end of the gameplay spectrum started to enter the mobile. Before, titles like PUBG were reserved for consoles and desktop gaming. 2018 was the year when it became clear that mobile can match consoles as an equal gaming platform.

Who Is a Hyper-Casual Gamer?

During the office ride, or while waiting to see the doctor, the hyper-casual gamer likes to kill time. They just don’t care about the genre as long as they’re amused and dedicated.

One day, a simple puzzle could well be followed by a complex strategy game. Furthermore, they often enjoy some light fun when they have nothing better to do.

If you think that’s totally humiliating for working publishers of games, don’t worry! Hyper-casual gamers are one of the key reasons why the booming mobile gaming industry spends a large amount of time on a range of gaming genres.

This kind of motivation is exactly what developers have in mind when creating a hyper-casual game. 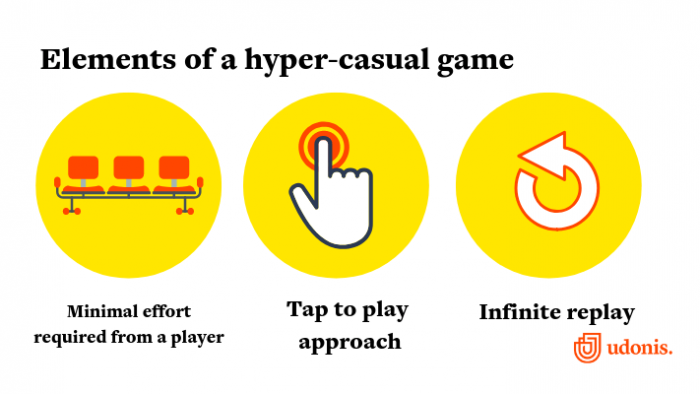 Key Elements of a Hyper-Casual Games:

By simple we mean EVERYTHING! Hyper-casual games should be so simple you can understand them without a tutorial. You just need to download them and start playing. This is the type of game you will play when you have some spare time you want to spend. In other words, a hyper-casual game should be short, easy to play, and instant.

The user interface of hyper-casual games should be minimalistic. There isn’t plenty of elements, menus, or numbers. Many such games only have one button or “controller”. The mechanics behind hyper-casual games are also very simple and straightforward.

Hyper-casual games should be able to play infinitely. Repeating a game after game can become dull after a while, these types of games have to contain a variety of attributes to keep the gameplay re-engaging and fun. For this reason, there is always a harder level in games of this genre.

As previously mentioned, hyper-casual games shouldn’t require a set of skills, a learning period, or a high concentration of the game player. Play in public transport, while you’re watching the tv, even on the toilet. 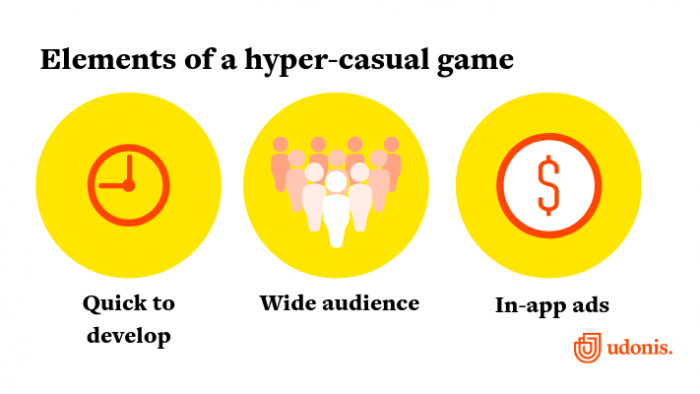 Often developed in a matter of weeks, even days! Quickly designed and published. If the testing period shows that the game has potential, the game is published and advertised. After the soft launch, the publishers know what works and what doesn’t. The data gathered from tracking key mobile game metrics will help the developer further optimize the game to reach its full potential.

Hyper-casual games can be enjoyed by anyone – it’s a universally fun experience. They are mass-market games that appeal to a wide audience because of their simplicity.

That’s why the target demographic for this type of game can be quite broad – your 28-year-old brother might like it the same as your 55-year-old mom.

We can’t talk about hyper-casual games without emphasizing how addictive they are. Short and simple game loops make you want to play over and over again. This is why players keep returning to this genre. 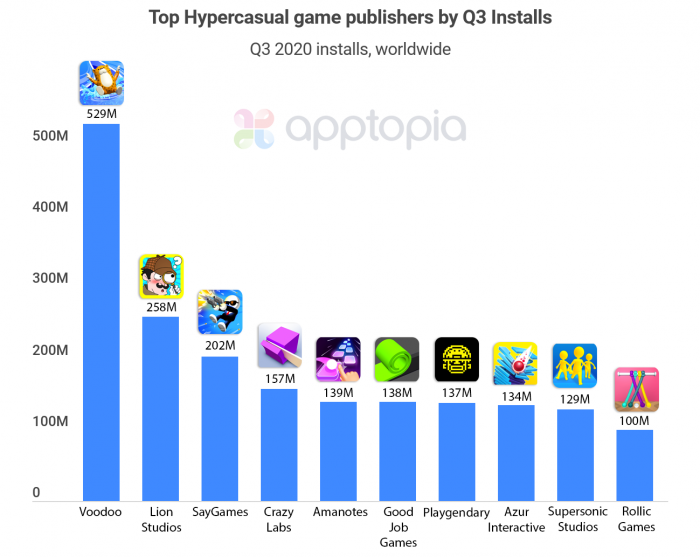 How Do Hyper-Casual Games Monetize?

Hyper-casual games are not only special in terms of their mechanics, but also in the way they monetize.

These games monetize mainly with in-app ads. More precisely, through a mix of rewarded video, playable and interstitial ads. This won’t generate a huge income per user, but the overall game will make up for it in scale.

Hyper casual developers want to reach as many users as possible, entertain them for a while, and show them a bunch of ads.

This is all great, but you have to be very, very careful about the number of ads you display. According to CleverTap, over one-third of gamers churned from a game because they saw too many ads.

You can prevent this from happening by relying on best practices for the genre.

One of them is to implement longer, not too frequent ad breaks instead of shorter and more common ones. Also, always keep interstitial ads for natural gameplay pauses (e.g. between levels or stages).

While ads traditionally work for hyper-casual games, more and more of them are expanding their monetization strategies. The most common type of in-app purchases we can see in these games are subscription purchases. For example, a “no ads” or “VIP” subscription. 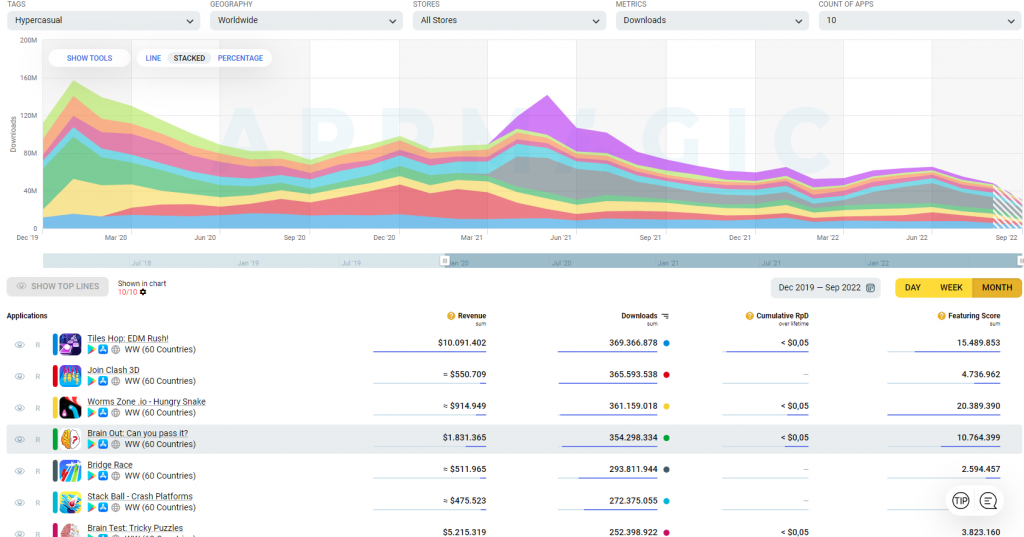 Current State of the Hyper-Casual Market

While hyper-casual games are still popular in 2022, the data shows downloads for this genre took a nose dive this year.

The beginning of 2020 was a huge success for the genre, with downloads shooting up. There was another peak in May 2021. Then, as lockdowns became a thing of the past, the downloads went down. The hyper-casual market lost more than 8% of its size in Q1 2022.

However, it’s important to note that mobile gaming as a whole saw a drop in downloads, so this is not a problem only hyper-casual games have. Also, even though this genre of mobile games is not as popular in 2022 as it was in previous years, it’s still a profitable genre that will continue to develop and grow.

While downloads for this genre went down in 2022, many games are still making a profit. These are the top-grossing hyper-casual games of 2022 so far.

To Sum Up Our Thoughts:

Success in the hyper-casual genre might seem easy, but there is plenty of elements to think about. A hyper-casual game may look pretty straightforward, but with the increased competition and new and emerging publishers, you need to stand out to succeed.

The powerful marketing funnel will drive the growth of hyper-casual games. Hyper-casual games are easy to produce and simple to play, and with the right advertising push, they can generate millions! There are now even game design colleges with gaming degrees. It could be your first step toward working in the game industry.

Visit these mobile app conferences in 2023 to network and learn how to grow your mobile app or game. We have updated all dates!

Visit these mobile app conferences in 2023 to network and learn how to grow your mobile app or game. We have updated all dates!