Did you know that Alien Worlds is the top play-to-earn game?

To understand why this blockchain game is so popular, I’ve analyzed its gameplay, economy, and key metrics.

Alien Worlds is a sci-fi metaverse on the WAX, Binance Smart Chain, and Ethereum blockchains released in December 2020 by Dacoco. It can also be categorized as a play-to-earn game.

The game is set in 2055 – an advanced Bitcoin mining community, The Federation, found a way to escape the pandemic-riddled Earth through a wormhole. On their travels, The Federation found a supply of Trilium as well as discovered inhabitable planets.

This metaverse consists of six planets, all of which operate independently as decentralized autonomous organizations (DAO) and have their own resource strategy and games. Here’s a short explanation for each one and how they work together.

Players travel this universe to mine Trilium (TLM), the game’s token. There are many reasons to mine, the two most enticing ones being to earn a Trilium share or get an NFT pack.

There’s a limit as to how much players can mine – there’s a charge time for all mining gear.

By staking this token, players get voting rights, they can submit proposals and even run for planetary council. This is also a passive income opportunity as players can get staking rewards.

Essentially, players compete to mine Trillium, as this is a scarce resource, and then they use that token to gain more power in the game and planet’s DAOs.

Just like other play-to-earn games, Alien Worlds has NFTs. In this game, they’re used for mining, fighting, and missions, as everything in this game is tokenized. Additionally, players can trade NFTs, which is another earning opportunity.

On the BSC blockchain, players can access a Mission game that consists of sending a spacecraft on a mission and getting rewarded with TLM and NFTs. However, that’s only the beginning, there are plans to add more features to the Mission game as well as introduce a Fighting game in the future. 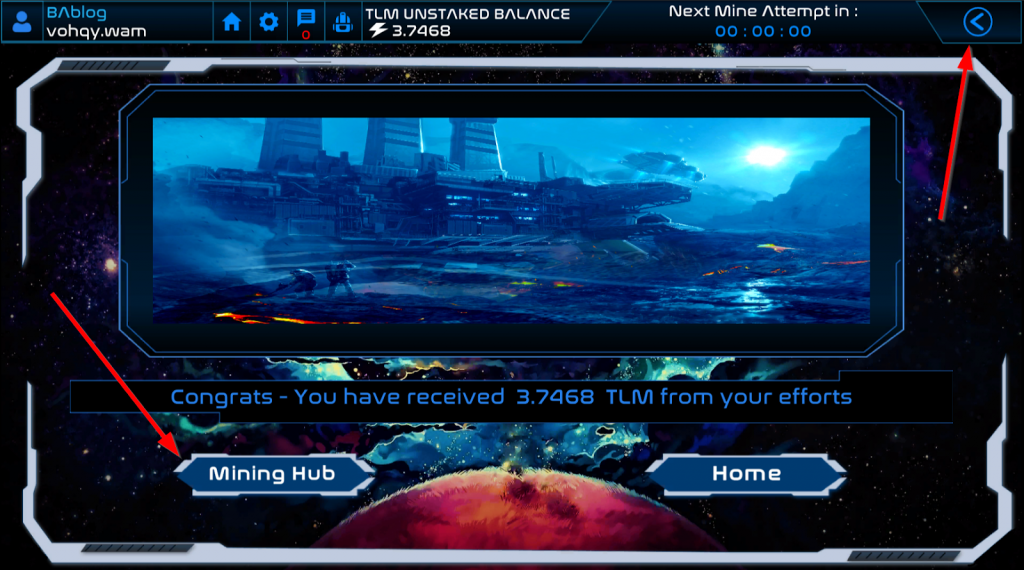 How to Play Alien Worlds?

In order to start playing, players need to set up their WAX wallet, pick a planet, choose a piece of Land, choose Tools, and start mining. The Mining Hub is the main place where players will spend their time, as it is shows their tools and land.

When players start the game, they get a free avatar and a basic shovel they can use to mine Trillium from various planets. However, as you might expect from a free starter shovel, its mining power is not very big. The goal is to acquire better equipment in order to have more success in mining, i.e., mine more Trillium. Players can find better tools while mining or by completing missions.

These are the basics of Alien Worlds gameplay.

Before we go deeper into this play-to-earn game, let’s take a moment to highlight just how successful this game has been so far.

Alien Worlds is currently the most successful play-to-earn game. Here’s data that confirms that.

At the moment of writing this article, Alien Worlds is fighting with Gameta for the number one spot when it comes to 30-day users and volume, according to dAppRadar. Not only that, but it’s the number three dApp in all categories and on the number one game WAX blockchain.

This leading play-to-earn game currently had more than 600,000 active users in the past 30 days, according to DappRadar. That’s a huge success for a blockchain game. As a comparison, the second top-ranking blockchain game, Splinterlands, had 300,000 monthly active users.

Furthermore, according to the game’s website, Alien Worlds has more than 8.3 million miners (players).

In the last 30 days, the amount of incoming value to the game’s smart contracts went over $2.29. (DappRadar)

In the last 30 days, more than 300 million transactions were made in Alien Worlds. (DappRadar)

Above, you can see the top sales for this game.

If we look at Trilium price, it has been quite stable from June 2022 up until now, ranging from $0.2 to $0.03. That’s good news for both existing players and those thinking about investing in it.

You can check out the current price as well as historical data on Alien World’s token, TLM, on CoinMarketCap.

A game’s presence on social media is another important indicator of the game’s success and how big and loyal its community is.

On Twitch, the game gathered more than 16,000 followers, similar to its Instagram page – over 12,000 followers.

As I mentioned before, everything in this metaverse game is tokenized, including player Avatars, Tools, Weapons, Land, Minions, Artifacts, and Missions. However, not all of them have been released at the moment – Artifacts and Minions will become available soon. All NFTs are depicted as trading cards, as you can see in the example above.

There are six rarity levels for all non-fungible tokens in this game – Abundant, Common, Rare, Epic, Legendary, and Mythical, Abundant being the most common and Mythical being the rarest. Furthermore, there are five levels of shininess for these trading cards – Stone, Gold, Stardust, Antimatter, and XDimension. 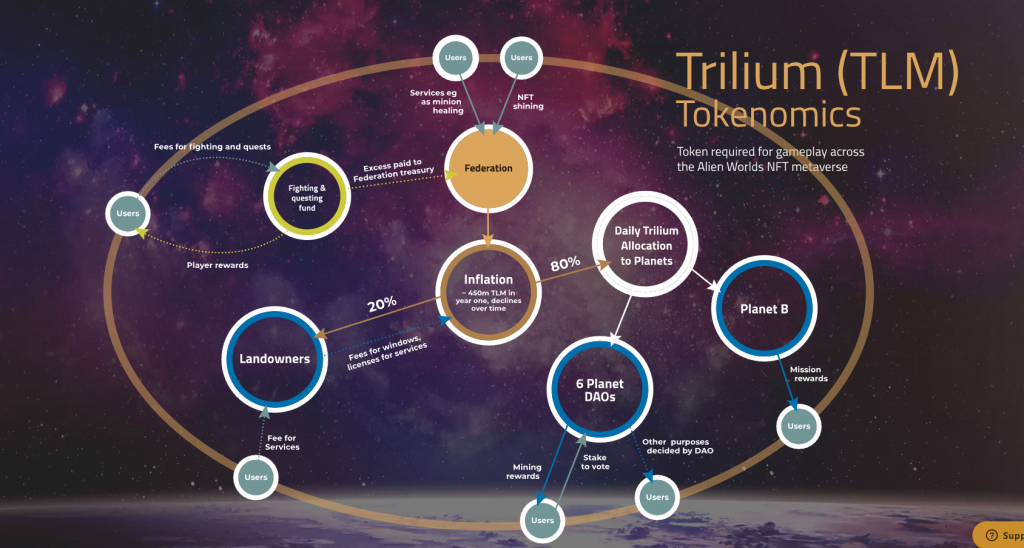 As I mentioned before, Trilium is the game’s native token and it’s used to stake to Planets and participate in games. According to the game’s whitepaper, “There is a finite supply of Trilium at 5 billion Trilium with inflation at 9% of supply in year1, 7.64% in year 2 and declining year on year.”

Every 24 hours, each planet in this decentralized metaverse gets a new supply of Trilium from smart contracts that’s proportionate to the amount of Trilium staked to that planet. More specifically 80% of Daily Allocation goes to planets, while 20% goes to Landowners.

Trilium has several use cases:

One of the most interesting aspects of Alien Worlds is its governance known as Syndicates. These decentralized autonomous organizations allow each planet to organize and elect Councils – people who are responsible for running their planet and have access to the planet’s treasury. Any player who stakes at least 5,000 Trilium can run for this position.

There are six Syndicates in Alien Worlds and five Custodians on each planet.

This is still a new game feature, but what’s clear is that it will give an additional layer of strategy and fun to the game. 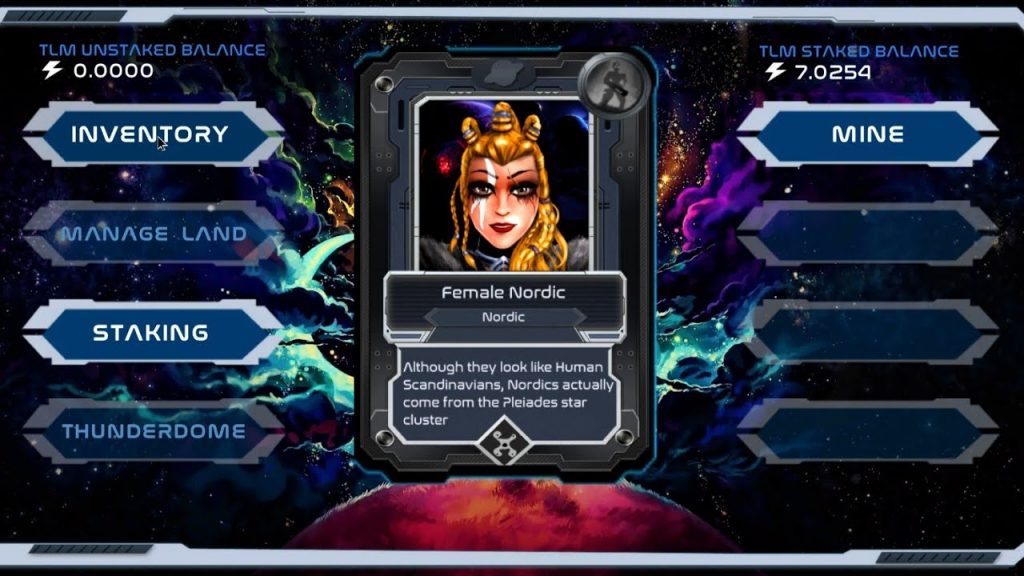 What Makes Alien Worlds So Popular?

Here’s the thing about Alien Worlds.

Mining, DAOs, and NFTs are all part of the reason why Alien Worlds got so popular. However, this game still doesn’t have exciting gameplay.

There still isn’t a traditional ‘play’ element yet in this game, unless you consider pressing the mine button playing. Those who are looking for a fun game to play will most likely skip Alien Worlds and go with a blockchain game with interesting gameplay.

So why is this game so popular?

Well, this metaverse game is still in its early stage, with more exciting features to come and many players are in it for the long game. Furthermore, the game has been quite stable, which means the income is also pretty stable. This is another reason that people like it and stick with it.

However, I would say the main thing that made Alien Worlds so successful and popular is the fact that the team behind this game managed to build a strong community and successfully onboard new players.

Here’s how they did it.

One of the main community efforts is localization.

Currently there 18 language channels in the game’s Discord server and according to Binance, “team focuses its community development strategy on the following regions: English-speaking countries, China, Russia, Japan, and Turkey.”

Furthermore, the team behind Alien Worlds supports the game’s main communication channels, Discord and Telegram. Their purpose is to provide a place for existing users to connect with one another and for new players to learn about the game.

Social media is another big part of community building for this metaverse. Its Twitter page is very active and keeps players engaged with daily communication and special offers. Additionally, there are different events the community can take part in. 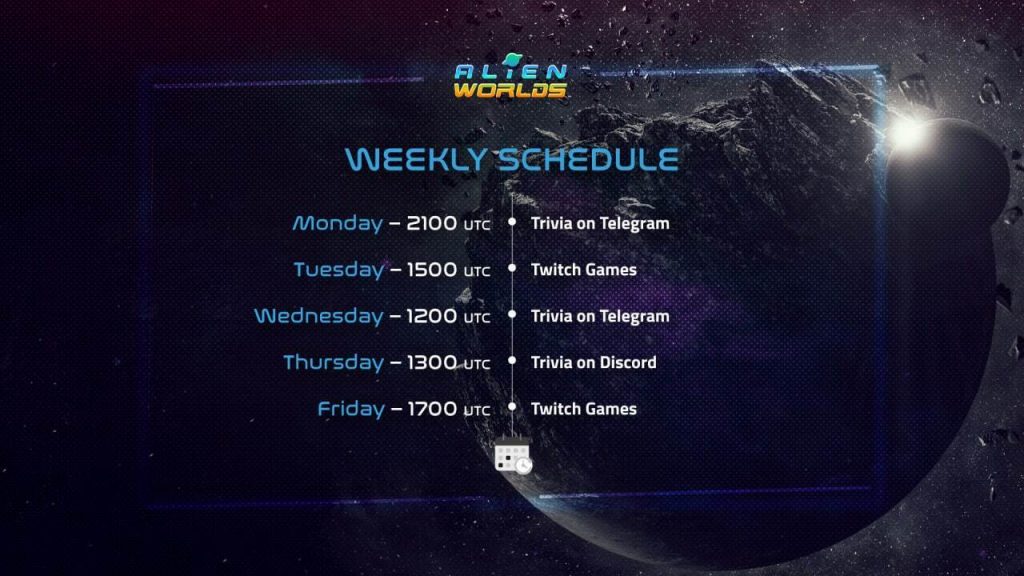 Weekly events include trivia on Telegram and Discord and Twitch games, which is a fun way to drive engagement. Furthermore, the game’s team often hosts Q and A sessions and other forms of direct communication with players on various social media channels.

All that keeps users invested and makes them feel like they’re a part of something.

Finally, the team behind Alien Worlds is taking another step toward decentralization with Galactic Hubs – a unique program used to fund projects and make more people co-owners.

Essentially, any member of the community that has an idea of how to drive innovations or help with community building can apply for these grants.

There are several different grant categories including eSports and gaming, art & collectibles, storytelling, and real-world applications.

For example, Accelerated Grants of up to 5,000 TLM are given for various community contributions that include marketing, translation, and tutorials. There are also Awards that will celebrate users who have made significant contributions online.

This game is still in its early stages, as is the play-to-earn market, so it’s tough to make confident predictions for the future.

However, if we consider the community-building efforts and the stability of this game, the future looks bright for Alien Worlds. As more features are introduced, this metaverse game has the opportunity to acquire even more players and truly establish itself as the first sustainable play-to-earn game.