Have you heard of Benji Bananas?

It is a mobile play-and-earn game with a growing userbase, which made it rank high on blockchain top charts.

Here’s what it’s about and what you can learn from this successful blockchain project!

What Is Benji Bananas and How Does It Work?

Let’s start with a bit of history.

Benji Bananas started as a traditional mobile game. It was originally developed by Tribeflame and published by Fingersoft back in 2013. In 2018, Animoca Brands acquired Tribeflame and in March 2022, the company decided to transition Benji Bananas to a play-and-earn game.

Currently, Benji Bananas is on the Ethereum and Polygon blockchains. It is a physics-based arcade mobile game that players can download from Google Play and Apple’s App Store.

The company’s goal is to bring blockchain gaming concepts to a wider audience and accomplish the mass adoption of play-to-earn games through mobile gaming. The gameplay consists of guiding Benji, the main character, through vines and collecting bananas and other items along the way. Collecting items unlocks various upgrades like cosmetics, as well as power-ups and boosters.

Overall, the game mechanics are simple, but addicting, which is suitable for a casual mobile game. Additionally, Benji Bananas’ gameplay plays a big part in its popularity.

To learn just how successful Benji Bananas is, check out the following section.

Since September 2022, this game experienced explosive growth and reached the top charts. Here are some metrics that prove that.

Let’s start with the number of active users, as this is one of the most important metrics for blockchain games.

According to DappRadar, the game had more than 460,000 unique active wallets in the past 30 days. That makes it the third leading blockchain game by 30-day users, following Alien Worlds and Trickshot Blitz.

If we look at downloads from the time the game was released, up until now, Benji Bananas surpassed 50 million downloads.

Throughout 2022, this game was consistent with 300,000 to 400,000 downloads each month. That shows us it’s still very popular and has a steady stream of new players.

Since August 2022, Benji Bananas’ transactions have been on the rise. According to DappRadar, this blockchain game had over 1 million transactions in the past 30 days.

When it was first released in April 2022, the PRIMATE token’s value was high, reaching its peak at $0.19, according to CoinMarketCap. However, that price dropped and stabilized in the following months, as is the case with most blockchain projects.

Additionally, PRIMATE’s market cap stands at $2.1 million. A token’s market cap is calculated by multiplying the asset’s circulating supply with its current price. If the market cap is high, it means that the token has a high value on the market.

Another factor that helps us determine how popular a blockchain game is the number of followers it has on social media.

On Facebook, Benji Bananas has more than 470,000 followers, which is outstanding.

On web3-related networks, such as Twitter and Discord, this game is not standing as well, with more than 15,000 followers on Twitter and more than 1,800 players on Discord, where Benji Bananas’ core community is.

The main two elements of the play-and-earn model in this arcade game are the Membership Pass and PRIMATE, the game’s token. Here’s how it works.

How to Start Playing and Earning

To start playing this blockchain game, players need to connect their wallet (Coinbase or MetaMask). Then, players need to verify their Membership Pass – if they don’t have one, they need to purchase it.

Next, players need to log in to their Google or Apple account and complete the KYC, Animoca Brands’ identity verification process.

According to Animoca Brands, “We are facilitating KYC to establish the legitimacy of our players and build a level playing ground for play-and-earn.”

Without going through this process, players can’t become eligible for the PRIMATE rewards campaigns, which is how players earn in the game. These play-to-earn events usually last for a couple of weeks and there have only been two seasons so far.

PRIMATE is the game’s main, and it seems, only token. It works as any other fungible token and players can swap it on various liquidity pools on the Ethereum Binance Smart Chain networks. Furthermore, PRIMATE is available on two exchanges: Huobi and MEXC. 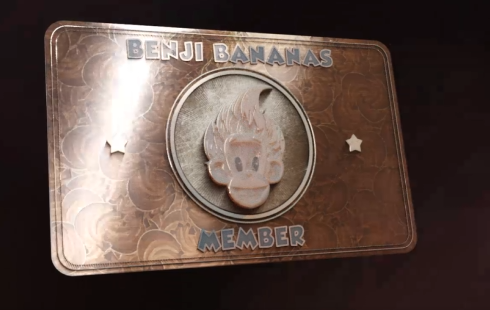 Benji Bananas Membership Pass is at the core of its play-and-earn model and allows players to start earning PRIMATE, the game’s token. It comes in the form of an NFT.

Players can purchase it on the following NFT marketplaces: OpenSea, LooksRare, Rarible, Coinbase, and X2Y2. It costs 0.05 ETH, which is around $77 at the moment.

While only one Membership Pass is required to start earning, players can also buy more, which increases their earnings.

What’s interesting is that this game has no other NFTs besides the pass. For example, there are various wearables and other cosmetic items for Benji in the game. I would expect those to be NFTs, but they’re not.

Many factors influence how much rewards players get. They’re based on overall gameplay and consistency to reward the best and most loyal players.

In the screenshot above, you can see an example of what affected earnings in season two.

Another interesting game feature introduced in the second season is that buying more than one Membership Pass comes with certain perks.

This feature not only encourages players to purchase more than one Pass, but also to acquire more of the PRIMATE token.

Why Is Benji Bananas So Popular?

Reaching the top charts in the blockchain game ecosystem is not an easy feat. Here are the key elements that made Benji Bananas so successful. Unlike many other blockchain-based games, this jungle-themed game is very playable. Even though the game mechanics are simple, this game is fun to play and quite addictive.

That’s mainly because this game started as a ‘regular’ mobile game and was developed without the play-to-earn model in mind.

This is also the game’s main competitive advantage. Not only did it enter the blockchain market as a well-rounded mobile game that can retain new users, but it also had a pre-existing pool of players. All of that had a huge influence on its success in the play-to-earn ecosystem.

Most play-to-earn games have poor user retention, which makes them unsustainable long-term. That’s mostly due to non-existent or straight-up bad gameplay that gets boring to players, as I mentioned in the previous section.

However, it also comes down to putting too much of a focus on the earning aspect.

Benji Bananas calls itself a play-and-earn game, instead of a play-to-earn game. While the two are very similar, it’s an important distinction. Play-to-earn games are all about earning tokens with little or no regard for gameplay, while the play-and-earn model puts more emphasis on gameplay and having fun while earning is secondary.

In other words, the focus is on exciting gameplay, while earning comes as a cool reward for playing. This is the key to having good retention and Benji Bananas recognizes it.

Blockchain gaming is still very new. There’s no tried and true formula that guarantees success. Because of that, developers who want to succeed in the play-to-earn ecosystem must be ready to make changes along the way.

Benji Bananas did just that. This game is constantly evolving, and most importantly, the team behind it listens to the players.

For example, the aforementioned Pass multiplier system and reward factors have been introduced in season two as the result of community feedback and requests. You can imagine how thrilled the community was that their creative ideas were implemented.

While this mobile game is still relatively new, it’s showing great potential – it has a growing loyal userbase, enticing gameplay, and the ingredients for long-term sustainability.

What do you think about Benji Bananas? Do you play it?