Finding success in the crowded match-3 market is challenging to say the least. However, this game makes it seem easy.

I’m talking about Royal Match, a puzzle game that quickly rose to the top charts and stayed there.

To find out the secret behind its success, read our Royal Match analysis.

In this dissection, I examine Royal Match’s ad creatives, target audience, and app store optimization, as well as look at key KPIs.

Unless otherwise stated, data in this article comes from AppMagic, a leading mobile app intelligence platform. Get 3 days of free access to all features as well as 10% off AppMagic by clicking on this link.

Let’s start our Royal Match analysis with a short overview of the game.

Published worldwide by Dream Games in February 2021, Royal Match is a match-3 game that quickly became one of the top-grossing puzzle games. It features King Robert, the game’s mascot/main character, and has a castle setting.

Players can go through thousands of match-3 levels, each more exciting than the previous. By solving puzzles, players earn coins that they can then use to decorate King Robert’s castle and unlock new areas.

What’s more, Royal Match has recurring live events and tournaments where players can compete against other players. 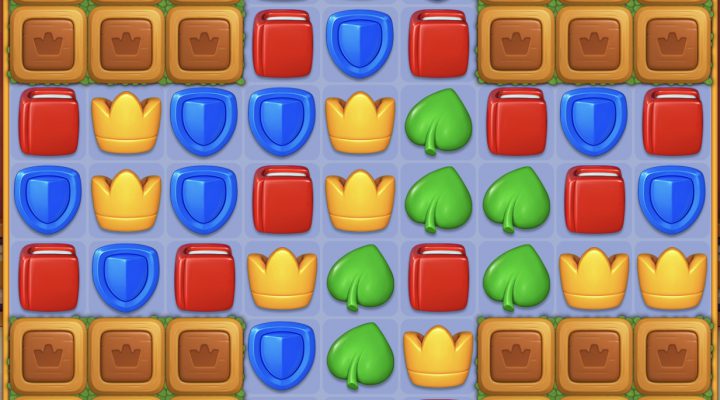 According to GameRefinery’s categorization, Royal Match has the following features.

How Successful Is Royal Match?

Let’s continue our Royal Match analysis with some data.

To find out just how successful this puzzle game is, I’ll go over the most important metrics like downloads, revenue, and RpD.

AppMagic’s data is from the game’s release in February 2021, up until now, and it includes all stores and countries.

Since the game’s release, Royal Match downloads have oscillated. There were many valleys and peaks, most notably the ones in June 2021 (over 4 million downloads that month), January 2022 (more than 4.4 million), and in September 2022 (4.2 million).

Because the downloads are currently on an upswing, we can conclude that Royal Match is still growing and is set to achieve even more impressive results.

Royal Match’s revenue is equally as impressive as its downloads count.

When looking at all-time revenue, this game is nearing $500 million – not bad for a fairly new game. If we take a look at the graph above, it shows that the revenues are steadily growing each month. That tells us Royal Match is consistently growing and doesn’t show any signs of stopping.

The main competitors of this puzzle game are:

Above, you can see how Royal Match fares against these competitors in terms of basic metrics like downloads, revenue, cumulative ARPU, and LTV.

Who Is Playing Royal Match?

Our Royal Match analysis wouldn’t be complete without info on Royal Match’s players. Here’s what you need to know.

When it comes to its userbase, Royal Match has a balanced gender ratio. More specifically, 55% of Royal Match players are women and 45% are men. (GameRefinery)

This data tells us that the primary target audience for Royal Match is players older than 25.

When it comes to players’ reasons for playing mobile games, according to GameRefinery, Royal Match attracts three main groups of gamers. Those player archetypes are Thinker, Skill Master, and King of the Hill.

Here’s an overview of each one.

Thinkers’ main motivation for playing is escapism. They enjoy thinking and solving puzzles to take their mind off other things.

Skill Masters are driven by completing milestones and improving their skills.

King of the Hill

For this player archetype, beating other players and being at the top of the leaderboards is the most enjoyable aspect of playing mobile games. 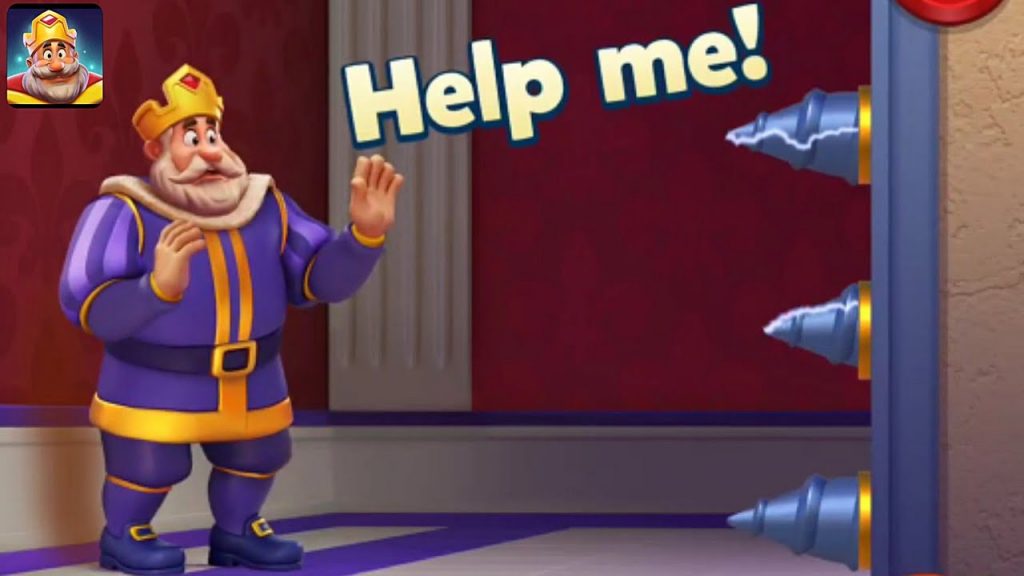 To get a better understanding of Royal Match’s user acquisition strategy, we must look at which ad networks and countries this game advertises in.

43% of Royal Match’s ad creatives in 2022 have been running in the United States. When it comes to ad networks distribution, Royal Match focused primarily on two channels – ironSource (52%) and AdMob (40%). 6% of Royal Match’s impressions come from Facebook.

Most of Royal Match’s ads are mini-game type ads where the goal is to save King Robert from a dangerous situation. That goes for both video and playable ads.

However, these are not your typical Homescapes-type ads that don’t include actual gameplay, but rather a lot of pin pulling. In Royal Match’s ad, the main character is saved by solving match-3 puzzles, which is core gameplay.

Putting puzzles at the forefront makes sense when we consider the main target audience for this game is the aforementioned Thinker – a player who enjoys cognitive challenges.

Furthermore, most Royal Match ads are so-called fail ads where the example player fails at completing a certain task – in this case, solving a match-3 puzzle.

This ad concept appeals to Skill Master and King of the Hill player archetypes. These groups of players are all about improving their skills and being better than everyone else. Seeing others fail drives them to try it out for themselves and prove that they’re more skilled.

Here are a couple of examples of Royal Match ads that use these creative concepts.

This is the overall top-performing Royal Match video ad in 2022 so far.

In it, King Robert is balancing on two beams high up above the water. Under each one is a tower of colorful pieces. The goal is to make the pieces disappear by matching them and bring King Robert down safely to the ground. However, the trick is in matching pieces on both sides in order to keep the King’s balance and prevent him from falling into the water.

As one would expect from a mobile game ad, the example player is unsuccessful at this task and King Robert ends up falling. It is at that moment that a big red “Fail” button appears.

The end card invites viewers to try it for themselves, and underneath, there’s a “Play now” button.

It’s no wonder this is Royal Match’s top-performing ad. It demonstrates the match-3 gameplay in a unique way. The balancing act makes the ad exciting to watch and keeps viewers’ attention until the end. Overall, it’s a great example of how video ads for simple puzzle games can be creative and attention-grabbing.

This is another example of a video ad where the main goal is to help King Robert by solving puzzles. More specifically, the King is underwater and trying to swim up, but the puzzle pieces are in his way. To help him get to the surface, the player needs to solve the puzzles.

Unlike the previous ad, which had a light and humorous tone, this one is more suspenseful and tense. It makes sense, as the stakes are higher – King Robert’s life is on the line. That’s achieved primarily with the choice of background music. However, the captions that say “Quickly” and “Hurry” also add to the suspense.

When it comes to playable ads, they follow a similar formula as video ads. The main difference, of course, is that they’re interactive and allow users to try out the game before downloading it.

Here are a couple of examples.

This is the top-performing ad in 2022 out of all Royal Match ads, including all ad formats. In it, players need to match the colorful tiles and complete the board. It’s the most basic representation of match-3 gameplay, but it makes sense for a playable ad.

Because it’s so simple, yet so successful, it proves that streamlined ads often perform best, especially when it comes to playable ads.

Other Royal Match playable ads are more like the game’s video ads. They follow the same concept of saving the main character by solving puzzles. You can watch an example of it above.

The goal is to get wood for the fireplace to keep King Robert warm. As you expect, that’s accomplished by solving puzzles.

Besides paid advertising, Royal Match also acquires users through organic channels. This is where app store optimization comes in. Not only can it improve a game’s visibility in the app stores but also boost paid UA efforts. 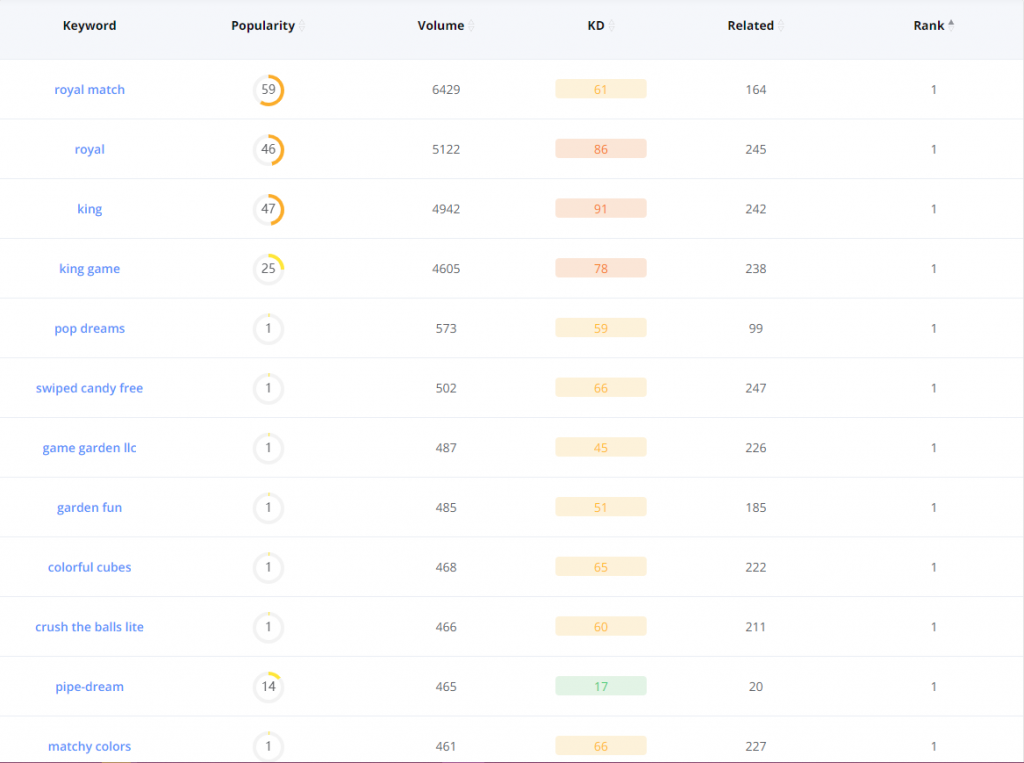 Wondering which keywords Royal Match ranks for in the first place? Check out the list above. (Data source: ASOTools – Use code UDONIS10 to get 10% off for 3 months!)

As you’d expect, this game ranks first for “royal match” and “royal” since those are brand keywords. The game also ranks for “king” and “king game”, which is great considering the game’s main character is a king.

However, consider that the popularity and difficulty of these keywords is fairly high. For example, the keyword “king” has a 92 difficulty score, meaning it’s hard to rank for it. But Royal Match managed to end up being the number one result for that keyword.

If we break down Royal Match’s icon to its basic components, it depicts the bust of the main game character/mascot. It’s a man, wearing a hat, and he’s happy/smiling, which makes him look inviting. According to GameRefinery, 9% to 15% of the top 200 games have these features in their icon.

Furthermore, the art style is cartoonish and the two main colors are red, yellow, and blue, which are primary colors.

By watching this 30-second promo video, users can get a pretty good idea of Royal Match’s gameplay and features. The video makes it clear that players need to solve match-3 puzzles to get to decorate King Robert’s castle. The more puzzles they solve, the more new areas of the castle they unlock.

It’s simple and to the point, which is what makes a good app promo video. 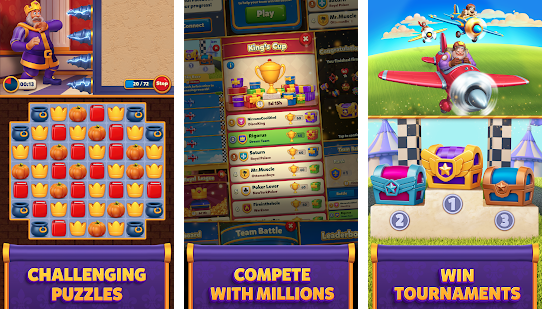 Just like the promo video, the game’s screenshots also visually highlight the main features. An important feature included are live events and tournaments, which is a social feature that makes this game stand out.

This is it, you’ve come to the end of our Royal Match analysis. For more mobile game dissections, go here.