Top Mobile Games and Apps of 2021 by Downloads, Consumer Spend, and Time Spent

In this report, we’ll break down the top mobile games and apps of the past year by monthly active users, downloads, and consumer spend. This will give you an insight into the ever-changing mobile app market.

Without further ado, et’s find out which apps and games were the most successful in 2021! 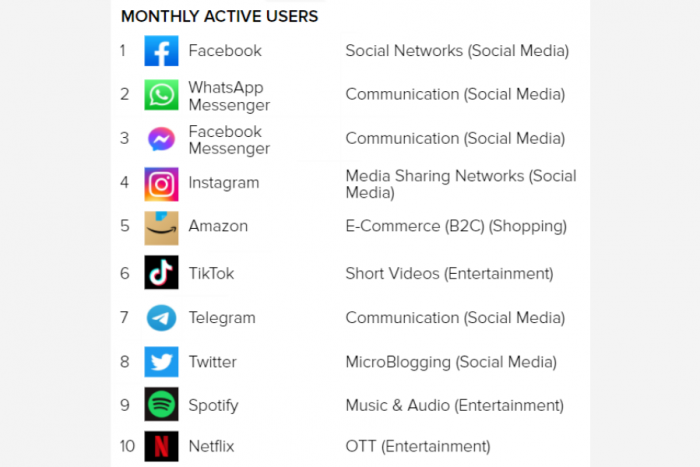 This doesn’t come as a surprise because the popularity of social apps has constantly been rising for years already.

Also, the pandemic is not over just yet, making people continue to communicate more virtually. 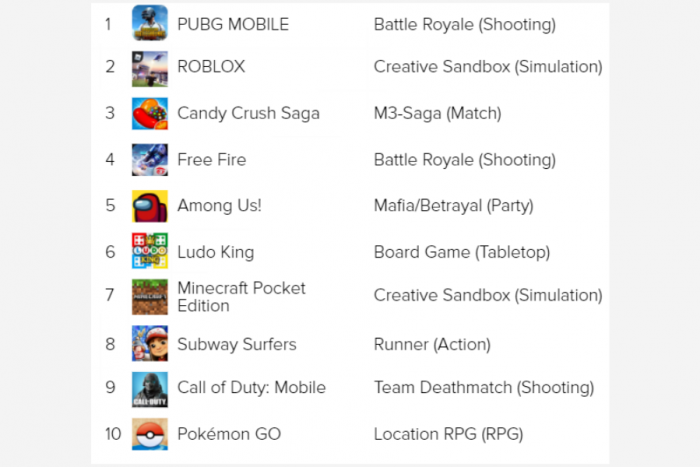 When it comes to mobile games, the top three games in 2021 by MAU were PUBG Mobile, Roblox, and Candy Crush Saga. The year before, PUBG Mobile and Candy Crush were also in the leading positions. This just shows how dominant these games are in the MAU category. 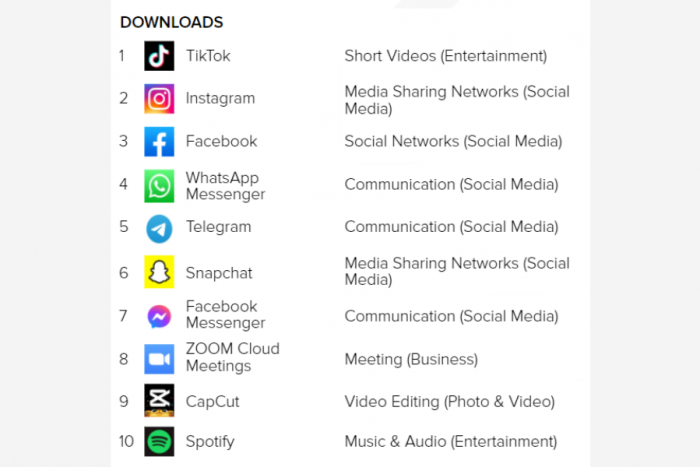 If we look at top mobile apps by downloads, TikTok was number one in 2021, followed by Instagram and Facebook.

This is the second time in a row TikTok won first place. Obviously, this platform wasn’t just a pandemic trend but an extremely important contestant that is here to stay.

The top mobile games by downloads in 2021 were Garena Free Fire, Subway Surfers, and Roblox. In these rankings, the title in the leading position didn’t change from the last report either. 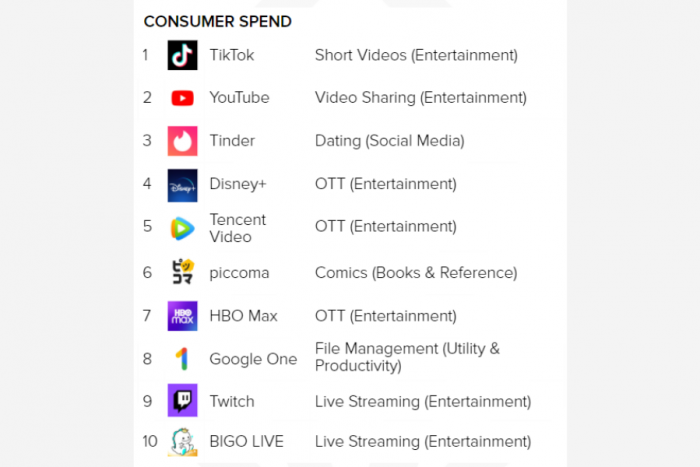 When we rank mobile apps by consumer spend, TikTok comes up on top, followed by Youtube and Tinder. Obviously, users are ready to open their wallets to have some extra fun on TikTok.

In this section, we’ll go through the top mobile games of 2021 by downloads, consumer spend, and monthly active users in the US. 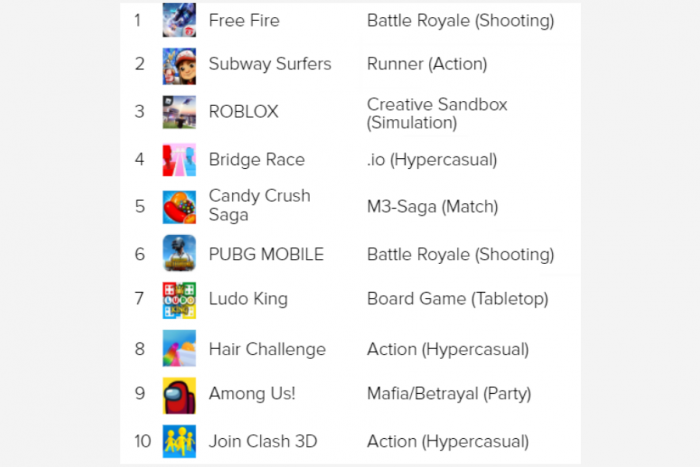 Above, you can see the top 10 mobile games on the US market by downloads. ROBLOX, Among Us!, and Project Makeover took the first three positions. Noticeably, most titles on the list are from the casual/hyper-casual category.

Roblox was not just the most downloaded game in the US in 2021, but the game players spent the most money on. Some other games that successfully monetized their players in 2021 are Candy Crush Saga, Garena Free Fire, Coin Master, and Pokémon GO. 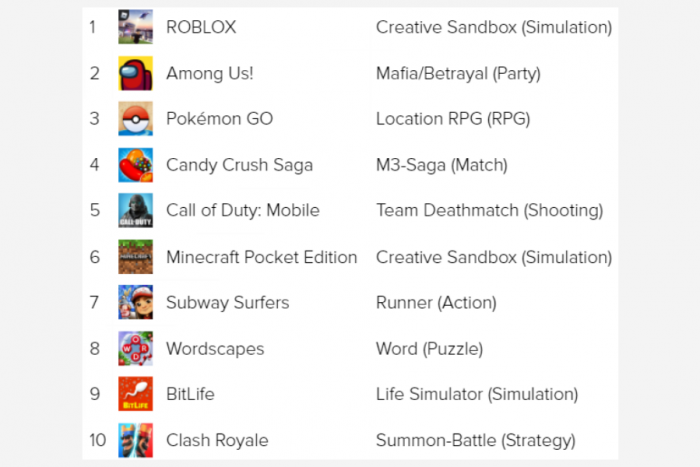 If we look into rankings by monthly active users, Roblox again comes first.

It’s followed by Among Us, Pokémon GO, Candy Crush Saga, and Call of Duty: Mobile.

In the section below, I’ll go through the top social media apps of 2021 by downloads in three markets: AMER, APAC, and EMEA.

Considering TikTok’s ongoing popularity, it’s no surprise this mobile app was the top social networking app of 2021 in AMER by downloads.

That happened for a couple of different reasons. First, people stopped perceiving TikTok as that “Chinese app”, and it became more accepted in the American market. Furthermore, the app started attracting an older audience, not just the Gen Zers like before.

Finally, the pandemic has brought this platform into the spotlight, and it seems like it’s not going away any time soon.

In the APAC market, TikTok was the most downloaded social app in big markets like China and Australia.

In India, Instagram was the number one app, while in Japan, that was Line – a native messaging app. When it comes to South Korea, a completely different app came first – Karrot, an app for local selling and buying.

Can you see what all these social app lists have in common?

TikTok has secured the number one place in many different countries across the three major markets.

However, in some countries, people prefer native apps to established, globally recognized ones.

In most North and South American markets, Disney+ was the most downloaded streaming app. YouTube was #1 in the US and Canada, while Netflix took first place only in Brazil.

However, Netflix still ranked second in most markets in the AMER region.

Here are the top finance apps of 2021 by downloads on the AMER market: Coinbase, Wealthsimple Trade, Bienestar Azteca, Banco PAN, and BNA.

It is noticeable that most of the apps on the list are country-specific, except for one – Coinbase, a cryptocurrency wallet.

This happened due to an increased interest in cryptocurrency trading. We can expect more similar apps to make the next-year list.

The popularity of mobile retail apps kept on rising in 2021.

Above, you can see the rankings of different shopping apps by monthly active users on the AMER markets.

In most South American countries, the top retail app was MercadoLibre. On the other hand, in Canada, the United States, and Mexico, that was, of course, Amazon.

Food and drink apps are another category that experienced massive growth in 2020 and kept on growing in 2021.

If we look at the top apps by MAU, the list is quite diverse. PedidosYa was number one in Argentina and Chile. IFood Delivery ranked first in Brazil, and Rappi was the most popular in Colombia and Peru.

People used Yelp the most in the US, and the Canadians relied on Tim Hortons. UberEats only ranked first in Mexico, but it ranked second in multiple countries.

The final app category that keeps on rising year after year is – dating apps.

That’s why it’s no wonder to see Tinder as the most downloaded app in all AMER countries. Badoo made it to the #2 in most AMER markets, except for the US and Canada, where Bumble App came second.

Final Thoughts on Top Mobile Games and Apps of 2021

As you can see from this list of top mobile games and apps, in 2021, a lot of things remained similar to 2020.

Even though many people believed the trends from 2020 were just temporary, this prediction turned out to be wrong.

App categories like streaming, shopping, food and drink, and gaming kept rising, surpassing the numbers from the year before.

The rankings for top mobile apps and games didn’t change a lot either. Naturally, there are some up-and-coming contestants. However, in most categories, the first couple of positions were taken by familiar names.

It will be interesting to see what this year holds for the mobile app market. We’ll keep you updated!

The State of Mobile App Market + Predictions for 2022 & Beyond

Here is our global gaming market report for 2021. A no nonsense, easy to digest report on top mobile games and genres.

Mobile Marketing Trends for 2022 (Including Statements from Industry Leaders)

Knowing the mobile marketing trends for 2022 will make the difference between success and failure. Adapt to them.

163 Mobile Gaming Statistics for 2022 That Will Blow Your Mind

Looking for insider knowledge of the gaming market? Check out these 163 mobile gaming statistics for 2022 that will get you ahead!

The State of Mobile App Market + Predictions for 2022 & Beyond

Here is our global gaming market report for 2021. A no nonsense, easy to digest report on top mobile games and genres.

Mobile Marketing Trends for 2022 (Including Statements from Industry Leaders)

Knowing the mobile marketing trends for 2022 will make the difference between success and failure. Adapt to them.

163 Mobile Gaming Statistics for 2022 That Will Blow Your Mind

Looking for insider knowledge of the gaming market? Check out these 163 mobile gaming statistics for 2022 that will get you ahead!